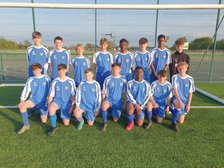 Its a first for the club!

Congratulations to Leigh Genesis U14 Charge who have won this season's Warrington Premier Division title. This is the first time a team from the club has won the Premier Division at any age group which makes the feat so special.

The team had been top of the league for most of the season and only dropped 4 points in the entire campaign, played 12, won 10, drawn 1 and lost 1, scoring 45 goals and only conceding 10 all season.

Well done to all the players for doing so well, the parents for their support and the Management team of Roy Faux and David Hughes for Managing and Coaching the team so effectively.